What is Dr Fone: Toolkit review

Dr Fone is one of the most easy-to-use, user-friendly Android recovery apps, and no wonder Dr Fone Toolkit is that popular among users who lost their mobile data.

Since recently, you can download Dr Fone App as a Toolkit which has a variety of functional modules such as: Data Recovery for Android, Data Backup & Restore, Root Manager, Data Extraction, Data Eraser and some others.

Basically, the Data Recovery module mentioned above is responsible for data recovery on Android.

Data Recovery module resources are focused on scanning for most of the data types lost on phones and tablets most frequently:

Where Dr Fone looks for your files

This software handles both micro SD and internal memory of a device. Despite the fact that internal memory doesn’t get scanned too deeply (due to Android system restrictions), there is a chance to find data deleted not long ago, at least unless it was overwritten.

Dr Fone software provides step-by-step recovery (and it’s an obvious benefit for inexperienced users). The steps are as follows:

1. Connect your smartphone or tablet to the computer

You need to connect your phone to PC via USB cable with enabled USB debugging. As a rule, it’s enough to accept it on your phone. 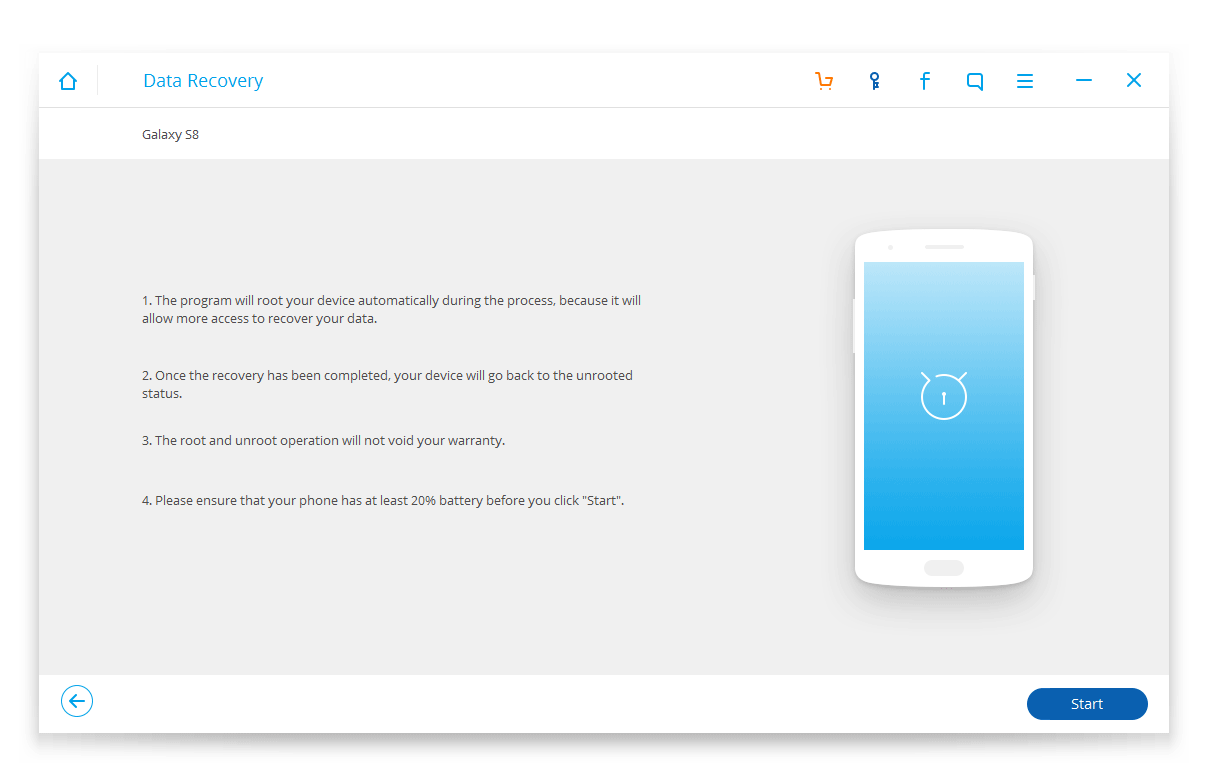 Dr Fone suggests ticking several data types (listed above). A user chooses between Standard and Advanced Modes (the latter one requires root access). The developer of the app reminds that rooting can lead to your losing a warranty and other technical issues; so we’d suggest getting started with the Standard one to manage simple cases.

Another thing affected by the scan mode is scan speed; however, the difference is literally several minutes. Like MobiSaver and other Android data recovery software, Wondershare Dr Fone has Preview for all types of data so you can recover only the files you need.

4. Preview results of the scanning

All file types are available for Preview before you save them. As the trial version of Dr Fone has limits, Preview also gives you an opportunity to assess how effective this tool is before you buy it.

5. Save files to any disk or device

It can and should be done securely without overwriting the files.

There are versions for Mac OS and Windows users. Their features are identical on condition that your mobile device can be connected to PC using a USB cable (make sure your handset has necessary drivers installed).

The app functions in a trial mode so its features can be tested right before you start recovering files. Download Dr Fone free trial from developer’s website.

When the free trial expires, you’ll be offered to buy Dr Fone Toolkit Full Version - $39.95 is a price for a One-year License and $49.95 for a Lifetime License.

My phone is Huawei Honor 4C on Android v5.1. After Factory Reset I tried to recover the contacts from the phone book via wondershare dr fone. 5.7.0 and dr fone toolkit for Android 8.33.64.

Both programs work but in my case the data wasn't found. To work with Dr. Fone root rights are required so you have to set them. The first thing I tried was Kingroot. Root access is provided on the phone but there is no request from Dr. Fone  (Dr. Fone sends a message) and SuperSU is required.

And I installed Dr. Fone on Windows XP without Internet-access.

During the connection of Samsung Galaxy S III Duos device via mtp I "accidentally" deleted an empty folder " storage" and with it everything was completely removed from the internal memory. At 7% stage the phone reloads then the program stops functioning at 13% stage. In short, this program doesn't work for me. I tried 8.3.3 and 8.3.2 versions.

A very sad situation happen to me. I installed the program initially on a PC in order to save the space on the phone. And it installed two more programs via USB and one of them wasn't needed at all. But it's okay. My phone is Samsung Galaxy SII GT-i9100, an old one with Cyanogenmod firmware. So that miraculous tandem after the scanning didn't just simply disconnect but deleted the superuser rights. And now in order to recover them I have to reflash the phone. In addition to this I didn't found anything after the scanning. I wouldn't recommend this program to anyone! Honestly, it has to be crossed out from the list and marked as a malicious one.

If anyone knows the way to recover superuser rights without reflashing the phone, please, let me know. All the programs using root access say that my phone is not rooted.

I recovered photos as it has been suggested here.

Before that I struggled with pirated versions listed here and at other sites: they recover photos very slowly or don't recover everything or the programs are full of viruses.

I launched dr fone toolkit for android 8.2.5, official version for XP (at that time it was the latest). I run a separate search for images and videos (didn't include anything else, as without it the program scans faster).

The images were almost of needed size right after the recovery. In the case with videos I had to wait till the end of the search.

Moreover DrFoneForAndroid folder didn't clean itself after Dr.Fone closing. Accordingly it refused to search for the second time until I manually deleted all the files (from DrFoneForAndroid hidden folder at the C drive root).

All in all I recovered 1281 pictures. Most of them are those that had been downloaded while browsing sites. But around 250 of my photos of standard size were also found. 42 photos of them and actually they are the most recent ones were damaged.

It's pretty weird as my Phillips Xenium V787 simply stopped recognizing the internal memory (the section showed by "Explorer". I.e.the phone was working but didn't show anything in Explorer). Therefore nothing should have been written on the internal memory. It looks like Android is arranged in that way: everything you need the most is deleted in the first place.

I installed root on the phone separately (KingoRoot), because it's required for other methods of recovery. Then Dr. Fone asks permission from KingoRoot. But if you don't install root than Dr. Fone somehow gains root on its own.

Paying 49$ for Dr.Fone and having in mind that I would need to pay for Root access separately seemed too expensive. I would probably buy it for 20$.

I'm tired of struggling with Wondershare Data Recovery for Android, I have repeatedly installed and uninstalled it, used various versions taken from different sites including this one. Previous variants aren't registered at all and the only variant is a trial version which after searching for photos says: “in order to recover buy and register” and so on.

Version Wondershare Dr Fone for Android 5.7.0 is also a problem in the end, after scanning the collection of photos and choosing one or all of them (it's doesn't matter) the lower "restore" button won't activate and remains gray. In general, it's again a waste of so much time without any result. Apart from being not in the mood because of the loss of several hundred photos this program irritates me and doesn't work properly.

The program hang up for 8 hours at 17% stage and found nothing. Are there any other free analogues of this program which work?

I scanned for about 40 minutes. Hanging up at 90% the phone was constantly reloading. After 20 minutes it worked and showed 242 messages. I saved them as it was suggested by the program. First of all it mixed up all the text messages and their senders and receivers and also tied my messages to the senders. Messages were from Petya but the program saved them as if they were from Olya. Secondly, some messages lost their text and another their encoding.

I didn't manage to return SMS to the phone. Moreover chat tabs had completely different "wrong sms" plus some of them were damaged and had unreadable encoding.

hangs up on two laptops.

I tried it on two phones but it won't go further than the connection tab. Xiaomi Mi2s (MIUI 7 on the 5th Android) and Panasonic CM1 (5th Android). What's wrong? I enable debugging mode. I tried the dr fone free trial version too. In general, I tried several similar programs but the results are almost the same.

The photos have been deleted (not overwritten). Only the thumbnails of pictures were recovered. The original files weren't found by the program. I downloaded the latest trial version. The searching was faster. But dr fone app is the same (judging by the number of files and the total size of what had been found)

Didn’t manage to restore files? Send us a question

Describe your issue using our feedback form. Give us details on where the files were deleted from, when and how, and we will try to give you an answer. Besides, your question will clarify and make more complete questions by other users, which is of great help for us in making our recovery guides more helpful.