Any free software will work for recovering images since the majority of them is stored on a sd card instead of an internal phone memory. It's easy to install and use it on a computer.

In this guide we will talk about one of such programs – PhotoRec. You will find out how to use PhotoRec when recovering disappeared pictures, images and photos on your phone sd card.

Why PhotoRec is the best choice to lost pictures on Android

PhotoRec is a free program for recovering photos, images, videos, documents (and files of other formats) from sd card. It can be installed on any platform like Windows / Mac OS X / Linux. 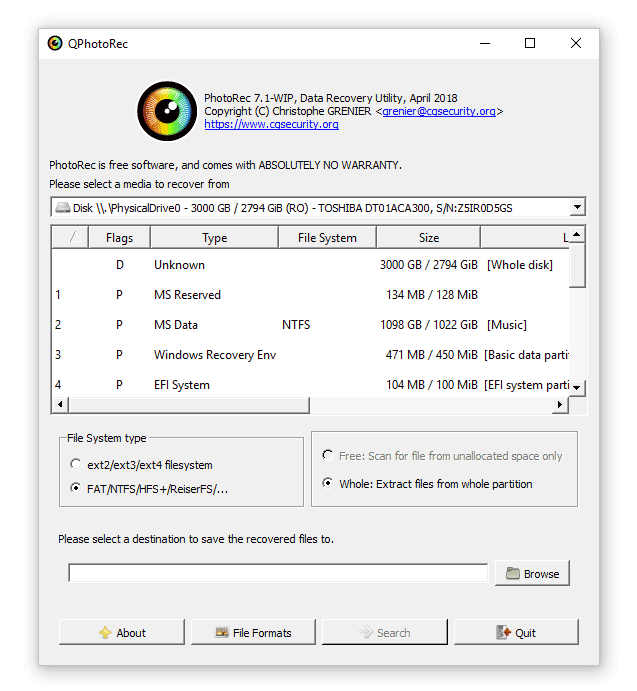 Why Photorec is useful and handy for recovering images:

Connecting the memory card to the computer

Note. Actually the program recognizes any media that is mounted as a separate drive. In the case when the images have been deleted on Android internal memory the recovery will be impossible. In this case you need to make a copy of the internal memory.

In most cases a memory card is connected in this way:

The easiest way to download the program is via the link:

We suggest using the latest version 7.1.

The program interface is concise, however, it allows you to set up the program quickly, specify the formats for searching for the deleted files and to run the recovery. And this is what we are going to do now.

1. Choosing the memory card to recover

In the main window of PhotoRec 7 you will see the list of available storage devices: hard drives, removable media devices, memory cards including phones and tablets with Android platforms and everything else except for the network drives.

From the list called “Please select a media to recover from” select the memory card where the deleted pictures were stored.

File system type – specify the filesystem used on the memory card during the time of data deletion if you know it. Or PhotoRec will try to find the file ignoring the file system.

3. Selecting the folder to save images

Specify the destination folder where you want the files to be saved under “Please select a destination to save the recovered files to”. Make sure that the disk drive has enough of free space (the volume should be of the same as the size of the memory card or bigger than it). 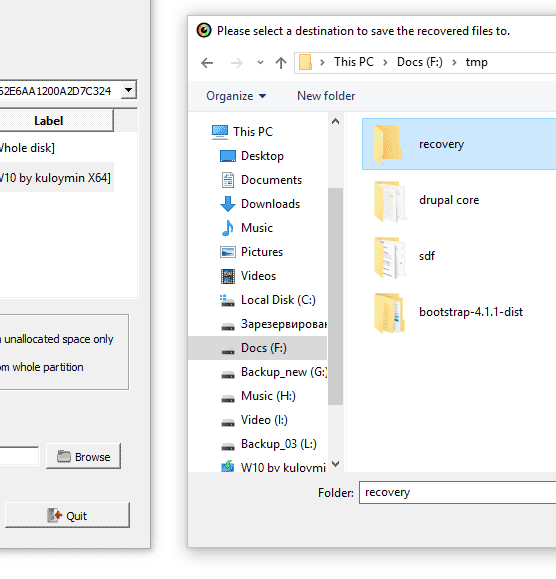 Important note. Never choose the drive from which the files have been deleted as the destination drive.

4. How to find the files

''Whole" option is for searching for the deleted photos on the memory card or phone sd card and the searching can be conducted on the unallocated part of the drive (ignoring existing files).

The second variant to

recover deleted pictures from phone  is called "Free" and it scans unallocated space on the memory card.

By selecting "File formats" specify the file types you want to find and recover. There is no need in specifying all the extension if you want to save time.

The most known images and photos formats are already present in the list, but if any of them is missing you can add it via Custom Own signatures. 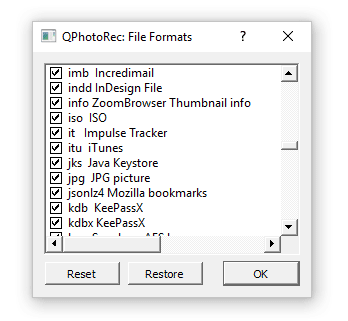 6. Scanning the memory card, searching for deleted images and saving the results

Full scanning of phone memory card with the capacity of 8GB took about 10 minutes. In general, the scanning process and searching for deleted files can take a long time. Scanning can be stopped and you can continue it at any moment. It's good when recovering and searching takes a few hours.

Is it safe to use PhotoRec? PhotoRec program is safe as it works only in the read mode. The files on your phone, smartphone or tablet memory card will remain as they are. This ensures a reliable recovery and the possibility to scan the deleted data as many times as you wish.

2. All related information is displayed in the log: the percentage of completion, the number of files and their format.

3. PhotoRec automatically saves the recovered results to the folder specified by the user.

4. "Recovery completed" appears upon the completion of the process. 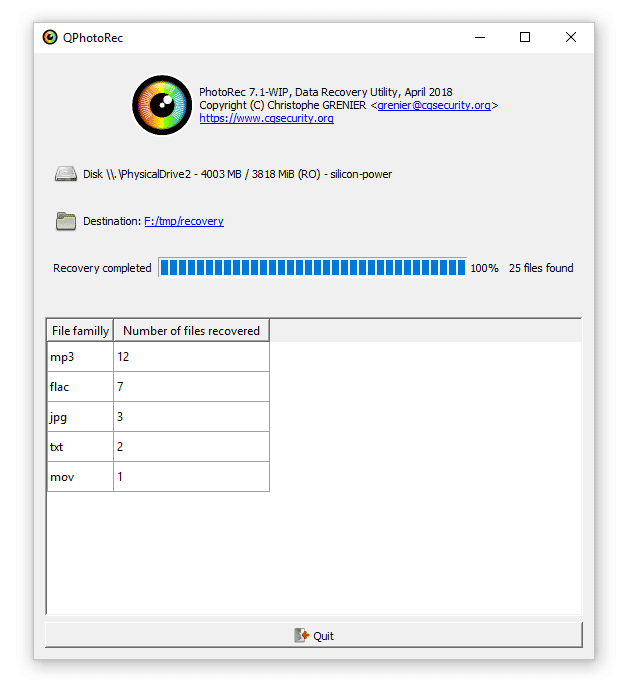 Advice. The names of the files and folders are "lost" in most cases. If you recover a photo you can find the names and the date of capture through the Exif data which is integrated in the file.

In addition. How PhotoRec works

PhotoRec ignores the file system and scans the disk structure. Therefore, the program is effective even when the files are corrupted or have been formatted.

When searching for deleted images PhotoRec firstly tries to find the blocks of data, than reads the information from the memory card sectors and than it finds the first 10 files from which it calculates the size of the block / cluster according to its location. Once the block size is known PhotoRec scans the drive block by block. Each block is included in the signatures database.

If the data haven't been fragmented the recovered file should be of the same size as the original one or a little bigger than it. In some cases PhotoRec reads the file size from its name and than the file comes back to its original size in accordance with the indications.

After it PhotoRec searches for the signature blocks. Due to this some fragmented images can be successfully recovered. 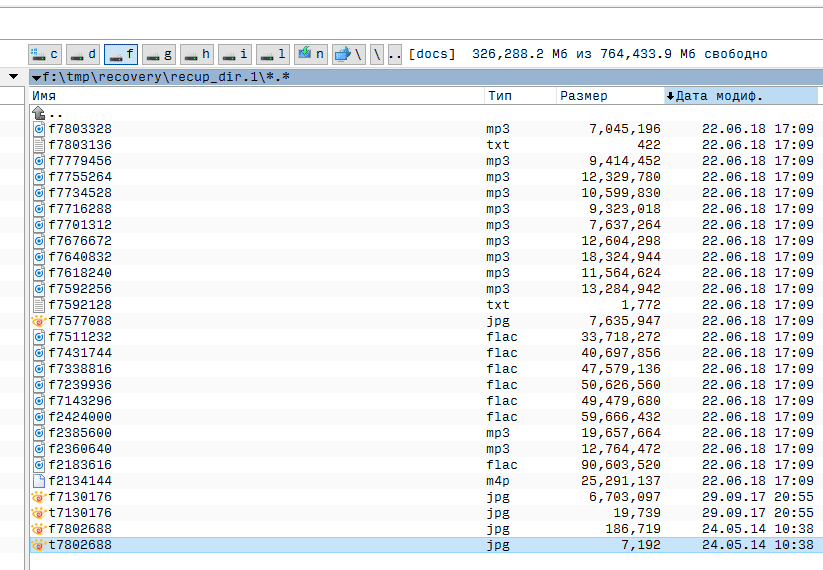 I would recommend advanced users to

restore pictures on Android phone via Photorec. As a rule, its free features are enough and there is no need in premium software or their trial versions.

If you have any questions on recovering images on a sd card ask via the feedback form. Questions on the program can be set directly to the English forum of the developer.

Questions and answers on photo recovering

1. (I want to recover photos which are present in phone but are not previewing)

When I connected my phone to my computer and I was transferring the files to the computer suddenly the photos get deleted but when I amazing for the images of it were still in the phone but we're not opening.

Can I get deleted pictures back on my Android?

2. I transferred photos from the memory card to my computer. Then I sorted them into folders. During processing one of the folders disappeared. Photos are neither on the card nor on the computer.

Can I retrieve deleted pictures from my phone? I stored them in RAW format.

The answer. Unfortunately photos very often disappear after being copied from a sd card to a computer in a wrong way. For the future: you have to copy the files by copy pasting not cutting them out. Then after making sure that the photos were transferred successful you need to delete them from the sd card.

Photorec will help to recover from the memory card. Most likely the photos are there. Specify the image formats to search and than scan the sd card.

My phone deleted all my pictures! I was checking my photos on my tablet then I went to application Snapseed to edit one of my photos to give it a sample when I went back from my gallery, unfortunately, the photos were gone. I checked it twice and I also restart my tablet but it didn't showed up.

I just want to ask if that is also considered to be accidentally deleted for me to download the application for recovering photos?

The answer. To recover images from a memory card we suggest using Photorec or Recuva and for an internal memory apps like DiskDigger or Undeleter (root access for Android is required).

After recovering via the app Photorec the size of many photos has been reduced to 20-30 Kb and the photos are greatly reduced in size. Is it possible to somehow recover the original size?

The answer. You have recovered the thumbnails instead of the original images. To return the originals first of all you need to figure out where they are. Go to the camera or another app (through which you have saved the photos) settings and check where the photos are stored. Recover the data in accordance with this: either on the sd card or the phone memory.

All the photos were simply deleted. I turned on the computer to go through the photos, opened the folder and a window popped out: the object that this shortcut refers to has been changed or moved and the shortcut no longer works. Is there a way to recover the photos? I will be very grateful. The folder is not the only one because there was a lot of photos as they were stored for over about 7 years (maybe more).

The answer. If you stored the images on a memory card or a flash drive you should check out the photos there. If the folder was deleted on the computer than the procedure is a standard one: install any free software for photo recovery like Recuva or Photorec and then specify for search the drive where the files were stored before deletion.

Didn’t manage to restore files? Send us a question

Describe your issue using our feedback form. Give us details on where the files were deleted from, when and how, and we will try to give you an answer. Besides, your question will clarify and make more complete questions by other users, which is of great help for us in making our recovery guides more helpful.