This article features a selection of the best programs for recovering recently deleted files on Android OS. These files could have been erased from phone memory or an SD card.

You can recover recover lost files - or at least part of what has disappeared from your phone’s data. This is the claim made by the developers of the data recovery apps which we're going to talk about today.

There is no perfect tool. When one fails to help, it's just a reason to try another one. Besides, almost all of them have a free version with limited capabilities, but when used together, have a long list of features.

What it is:  A utility for recovering lost data from Android/SD card under Windows operating systems and Mac OS. This utility makes the list for recovering deleted files from smartphones due to the fact that it recovers data written onto an SD card via Android OS perfectly.

Note. 7-Data Recovery is now called Disk Drill. The name change didn't affect the range of software capabilities in any way. The updated version supports not only hard drives, as the previous one did, but also any storage devices connected to your computer, including smartphones and tablets running Android.

To recover accidentally deleted photos, videos, music, contacts backup copies and other important files, you should follow the simple step by step instructions:

Root access to device file system isn't required, which is very convenient, but there is a significant drawback: a computer is required for this process as it's impossible to recover deleted files via this utility without it.

A recovery program for Android, which can recover deleted files from Android phones: multimedia, chat logs from popular messengers, contacts, text messages and other important data. The list of supported formats has 100+ extensions, including .jpg photos, audio, video and text documents.

Wondershare Dr. Fone has a free version, but according to reviews, its capabilities are much more limited than stated by the developers  in the description. According to the description, trial access allows you to:

An impressive list of advantages can't compensate for the large number of errors found by dissatisfied users. Just the fact that root access is required even for simple actions is quite disturbing.

However, Dr. Fone has some benefits: this program scans very fast, finds more than half of what has been stored in cache, and can actually recover the majority of recently deleted files. There are versions both for desktop and mobile, which is important. The Windows app is usually enough for most tasks.

The developer introduces the Undeleter app as the best one for data recovery on Android. However, its average rating on Google Play is 3.4, which puts this in doubt. Whether you believe the claim or not, Undeleter doesn't have a lot of free alternatives.

The Android recovery tool used to be a paid one until recently. Some features are now available after viewing an advertisement, including the quick recovery of image files, call logs, SMS and chats on a mobile device.

The app is irreplaceable if you don't have a computer at your disposal and everything you have photographed during a vacation has disappeared because of a program error. Scanning helps to find audio, video, photos and app APK  files that were accidentally erased but haven't been overwritten by other data.

Note. You can work with root directory on Android only after enabling root on your gadget, otherwise Undeleter will manage to find only cached images.

The Undeleter full version, which only costs $5, has no ads and also supports recovering of lost music and videos.

This utility for Windows is capable of recovering lost data from an SD card or device internal memory files on Android OS within a few minutes. The program is completely free, which makes it stand out among its competitors like Dr Fone. 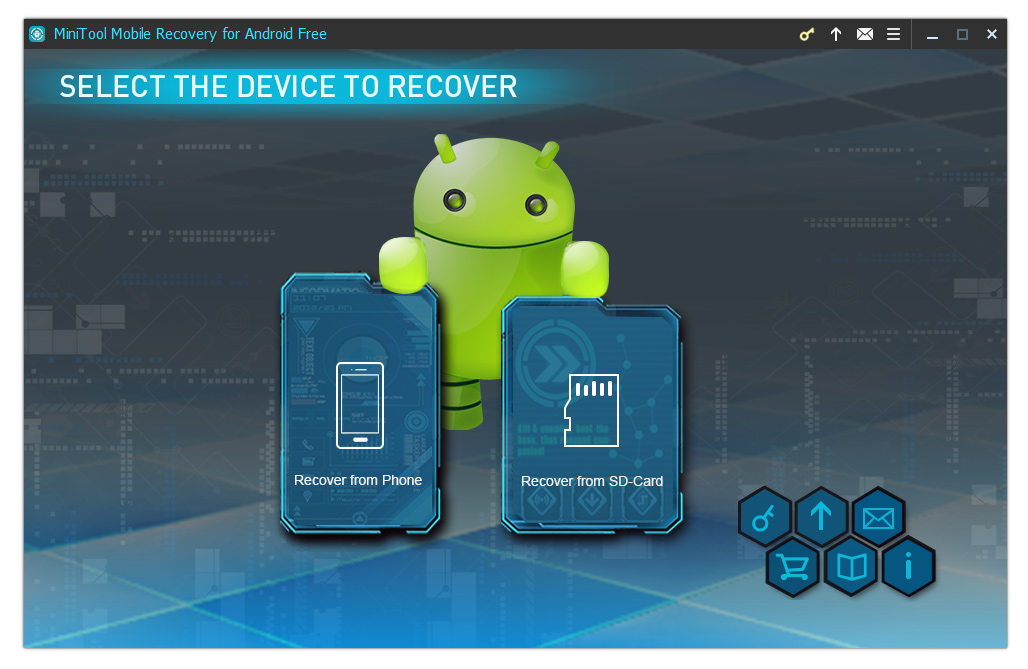 Minitool Mobile Recovery for Android has two recovery modes: recovering from a memory card or from device memory. You'll be able to recover nearly everything from a memory card when on a phone or tablet - logs are the exception - if nothing has been overwritten.The utility is likely to find almost everything, even copies of messenger chats that haven’t been backed up.

For correct operation of Mobile Recovery, root isn't required. It works via a desktop app, so you need a computer running Windows.

There are two versions of DiskDigger: one for PC (Windows) and one for Android. Let's talk about the latter.

DiskDigger for Android (free version) supports recovering deleted images and videos from a smartphone’s internal or external memory. Recovered data can be saved on your device and in Google cloud/Dropbox, which allows you to avoid overwriting files.

The mobile app works directly from your smartphone, so a desktop isn't required. The list of supported data types includes all popular formats of compressed images (.png, .jpg, .bmp, etc.).

Root access to the file system isn't required, but it's highly recommended to gain it: with it the search affects more directories inside your device and the probability of finding lost files significantly increases.

Another utility able to restore deleted files on Android devices without being installed directly on a phone and changing the file system. For recovery, you have to run the EaseUS Mobisaver program on your computer, connect the device and start scanning.

The current version, adapted for working with Android version 5.0 and later,  can undelete files, including images, music, videos, records and messenger chats. It even finds files that have been formatted or deleted after resetting the gadget to factory settings.